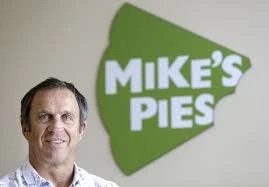 Some would say Mike’s Pies got its start in Mike’s kitchen at home. His mom knows better. The real origin of Mike’s business began three generations ago, when his Grandma Smith started a tradition that would no doubt make her proud. Mike’s mom’s recipes are the backbone of this award-winning company.

The real story goes something like this. Mike, a Florida boy playing linebacker at the University of Kentucky in the mid 70’s, loved to eat…specifically loved to eat his mom’s pies. But he got tired of waiting to go home for the holidays to eat them, so he asked how to make them, and she gave him a crash course on how to bake his favorite… Cherry Pie. He never got tired of eating them, and today Mike still engages in “quality control” every chance he gets.

When Mike settled down and got married in Tampa, he started making pies and giving them as gifts to neighbors and friends at Christmas. After two years of friends and neighbors telling him “You should sell these” he tested the market by making the first pies out of the kitchen in his house. They were a hit – and Mike’s Pies opened for business in South Tampa on March 3, 1992. The popularity of the pies grew, selling to a loyal following of local customers as well as restaurants through broad line food distributors. As sales expanded, Mike’s Pies would have to find a bigger location. After moving to a larger space six more times, Mike’s Pies took a quantum leap. On August 1, 2020, Mike’s Pies moved into its brand new, state-of-the-art, 53,000 square foot facility.

So today, you just might be eating Mike’s Pies in one of your favorite restaurants anywhere from Maine to Hawaii! As Mike’s Pies has grown, our pies have made their way onto menus in 45 states, Canada, Mexico, Midway, Puerto Rico! But one thing has not changed: Mike’s Pies’ commitment to quality and desserts made without adding fillers, preservatives, or other artificial ingredients. Currently, Mike’s Pies has laid claim to 15 National Championships at the annual Great American Pie Festival, further proof …we cut no corners at Mike’s Pies…because as Mike likes to say…“there are no corners on Pies!”